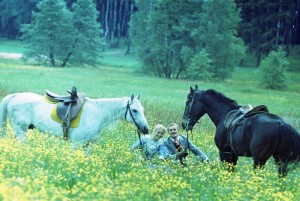 An epic story of three ambitious young men searching for their dreams of prosperity by starting a textile factory together: Karol, a Pole (Daniel Olbrychski); Moryc, a Jew (Wojciech Pszoniak); and Max, a German (Andrzej Seweryn). However, deceptions, emotional manipulations and acts of sabotage lay bare the unbridled capitalism and human cost that lies underneath the veneer of industrial progress. This incisive, and elegantly-realized Dickensian tale of greed, human cruelty, exploitation, and betrayal earned Wajda the first of his four Best Foreign Film Oscar nominations.

This rare screening of the original full cinema version of the film will be introduced by Andrzej Wajda through a recorded personal address, and followed by a Q&A with its lead actor, Wojciech Pszoniak.