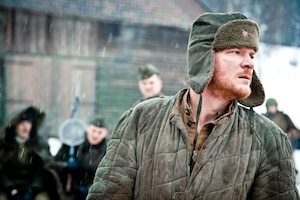 Hiding alone in her farmhouse, Rose, a widowed  Polish Masurian, attempts to survive the brutal attacks by Soviet soldiers and Polish locals. Having returned her husband’s wedding ring, former soldier Tadeusz decides to stay and assist Rose in replanting her mineinfested potato field. Gradually a tender and fiercely loyal relationship develops between the two of them. Described by Variety as “almost unbearably brutal yet hauntingly romantic”, the film deals with an unknown chapter of Polish history: the post-WWII persecution of the Masurians, the indigenous residents of northeastern Poland.