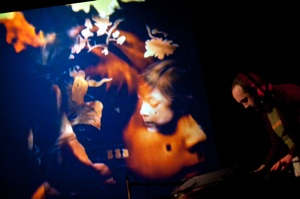 Andy Votel presents: Kleksploitation, an homage to Pan Kleks, a Polish trilogy of films for children from the 1980s, loved by Poland’s children from that era. Votel draws on images, music and sound from the original films, selecting and subverting, to coax their darker side to the surface and create something wholly original, unsettling and — at times — weirdly humorous.

The Pan Kleks trilogy was scored by Andrzej Korzyński, a Warsaw composer whose unearthed catalogue Votel is currently releasing on his Finders Keepers label, including music written for Andrzej Żuławski’s incredible Possession. Andrzej Korzyński was the precursor of electronic music in Poland in the 70′s and his use of first synthesisers will be the musical background and inspiration for the show. The images, in turn, will take you on a nostalgic journey to the magical and psychedelic reality of the 80′s Poland’s children film trilogy Pan Kleks.

Kleksploitation was commissioned by Unsound 2012, the acclaimed Kraków festival of innovative music, a co-presenter of this special London performance. It also announces the first edition of Unsound in London, which will take place later in 2013.